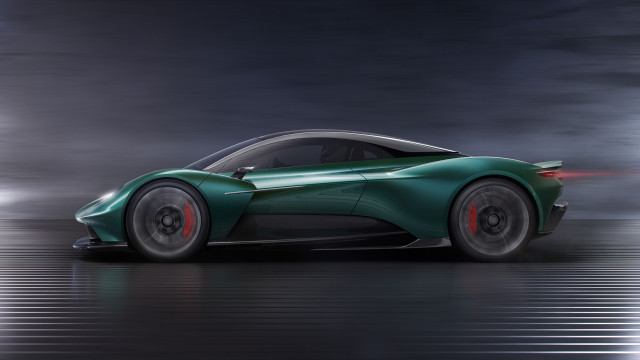 Aston Martin is known to be historically rich at building high performance sports cars. The next generation Vanquish is on its way with a mid engine, breaking the legacy of usual sports cars. Though it is going to take a couple of years to make it happen, a handful of details are here to keep everyone excited in the meantime.

The Vanquish will be of the same basic layout as the forthcoming hypercars like Valhalla and Valkyrie but the production won’t be limited. With a new hybrid V-6 powertrain the company is about to create plans to multiply throughout its portfolio. The engine will be located behind the driver and will be able to produce up to 700 horsepower which would be a match for competitors like the Ferrari F8 Tributo and McLaren 720S. Aston Martin‘s new hybrid turbocharged 3.0 litre V6 engine comprises of 6 cylinders and weighs south of 450 pounds.  The company has confirmed that the engine of the Vanquish will no longer be the same as an AMG-sourced engine. AMG are looking to replace their eight-cylinder with a hybrid four, prompting Aston Martin to develop the 3.0 litre V6, to be used first in the 2022 Valhalla. They have also confirmed that the carbon-fiber tub will be replaced with a bonded aluminium spaceframe. The V6 engine will come with a dry sump system, which allows it to be loaded as low as possible, for better centre of gravity.

The Vanquish, admittedly, will not be a prophet of impeccable interior design for its successors. Having said that, it will be anything but uncomfortable. It will have an additional passenger space along with a vast amount of customisation options and racy elements. As per the concept image it will have oversized tires along with a sloping roof line adding up to the appearance of it.

The Vantage is unlikely to go through certified crash testing. However, following Aston Martin’s usual trend and as seen in the Vantage, the Vanquish should be expected to come with certain safety features such as a 360 degree camera system, blind-spot monitoring, lane assistance, etc. Aston Martin’s upcoming hypercar is predicted to arrive with a touch screen heavy infotainment system. There will be an eight inch touchscreen display controlled with a rotary knob. Though not much information about fuel economy has been provided, buyers should be prepared to pay through the nose for this hypercar’s fuel.

The Aston Martin Vanquish will be the perfect match if one has an eye for high end sports cars. With a starting price of $300,000 the Vanquish is going to be one of the revolutionary sports cars that cost less than a million dollars. Aston Martin expects its new brainchild to take the market by storm. Although the price tag will be out of reach for the majority of enthusiasts, it will still be a welcome sight in the market littered with whopping 7 figure priced hypercars. This is going to be a treat for the sports car fanatics and with a stylish body and exterior similar as the Ferrari, 700 horsepower producing mid-engine, what’s not to love about this demon in the making?

Aston Martin is placing their bets on building an empire of mid engine hypercars, moving out of their regular front engine comfort zone. From the available information on both the Valhalla 2022, and the Vanquish 2024, this gamble seems like one that is going to pay off.