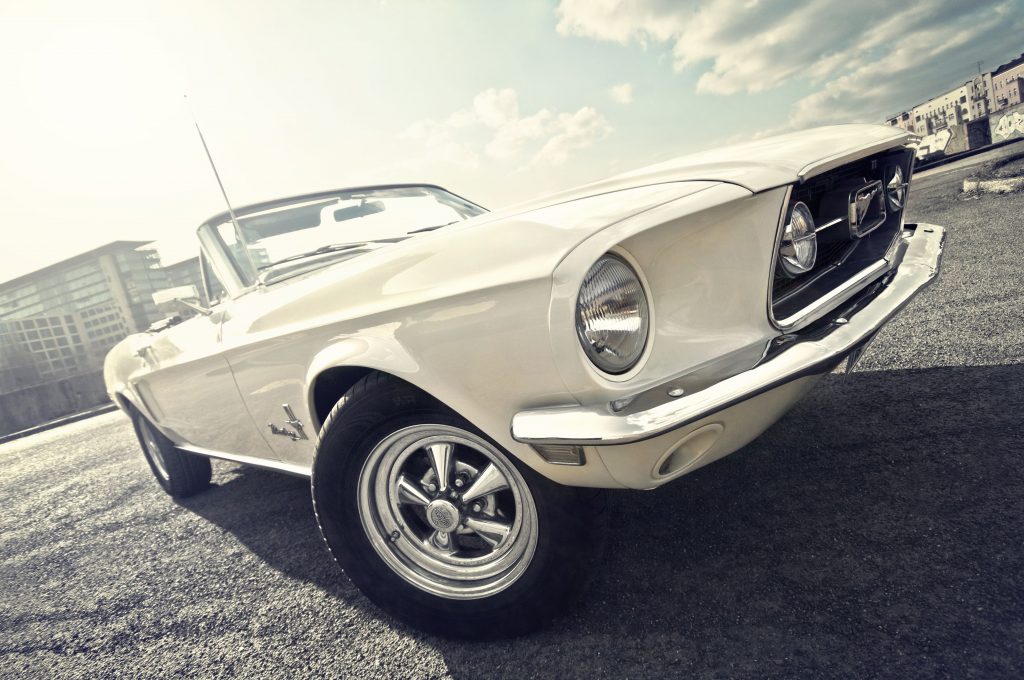 The Mustang is the longest running Ford nameplate, having been in production since 1964. Distinguished from contemporary vehicles by their signature long hood, the Mustangs were a class of sporty coupes which would go on to be the most successful Ford concept till date. While there is some ambiguity regarding the origin of the name, ‘Mustang’, there is no denying the fact that it now makes the list of dream cars for every car lover. Here we discuss one car from each of the many generations of the legendary Mustang.

The 1964½ Mustang took the market by storm. It became the most successful Ford production since the 1928 Model A. It became so popular that it was even featured in the James Bond movie, ‘Goldfinger’. The new superstar came in two variants, convertible and hardtop. The convertibles came with a 210HP engine while the hardtops were endowed with a 164HP V-8. Originally, the convertibles were priced at $2,557 and the coupes at $2,320.

Several upgrades were made to the original version, up until 1973, with increases in engine capacity and to the size of the car, in general. From 1969 onwards, Ford brought about a number of variations based on performance and design, some which were Mach 1, Boss 302 and Boss 429.

The new model of the original Mustang was released on 21st September, 1974. Based on the Ford Pinto, the Mustang II was smaller than the original Mustang, but it was heavier, owing to the additional equipment that had to be put in to meet the newly introduced restrictions. The 1974 models were either incorporated with the  2.3 litre I-4 engine or the 2.8 litre Cologne V-6 engine. 1975 saw these being modified to the 4.9 litre Windsor V-8, paired up with C-4 automatic transmission. The second generation Mustangs came in a number of variations, namely, hardtop, hatchback, Mach 1, Ghia, etc. Up until 1978, the Mustang II saw many changes to its design and performance, as an attempt to improve aesthetics and fuel efficiency you.

The 1979 model of the Mustang based on the Fox platform saw a number of changes in the engine from the Mustang II. The new Mustang came in hatchback, coupe and convertible models. The 2.8 litre V6 was replaced with a 3.3 litre model while the 5.0 litre V8 was replaced with a 4.2 litre V8 which again was replaced in 1982 by another 5.0 litre V8. The Cobra was replaced by the Mustang GT in 1983 and in the following year, the Mustang convertible returned to the market. Even with the introduction of a new turbocharged inter-cooled engine and the celebratory 20th anniversary Ford Mustang GT350, sales kept deteriorating and a radical change was required. This change came in 1987 in the form of a newly styled Mustang, and the new model persisted to the end of the third generation. The third generation of the Mustang came to a close with the introduction of two high performance models, the Ford SVT Cobra and the Cobra R.

Towards the end of 1993, Ford incorporated in its Mustang the RWD system and discontinued the coupe version. This generation saw the introduction of the 3.8 litre OHV V6 and the 4.6 litre SOHC V8 engines, the latter being incorporated in the 1998 Mustang GT. Several modifed versions of the two engines were introduced right up to 2004. The fourth generation Mustangs came came in the form of Bullit, Mach 1, Cobra, etc. To meet the driving regulations in Australia, Ford accordingly modified around 300 Mustangs. Even then, sales did not do well and Ford had to take a number of promotional steps, including the creation of a Mustang V10 convertible equipped with a 6.8 litre V8 engine.

The newly introduced 2005 Mustang was built along the lines of the first generation Mustangs, powered by 4.0 litre SOHC ebfuves while the GT version used 300 HP a 4.6 litre, SOHC V8. In 2010, the Mustang only saw a change in its bodywork while the engine remained unchanged. The introduction of the Getrag-Ford MT82 6-speed manual or the 6R80 6-speed automatic based on the ZF 6HP26 transmission demanded a new 3.72 litre V6 engine. 2012 onwards saw the consecutive introductions of new Boss 302 and Shelby models with upgraded aluminium engines which were lighter and more efficient, while the GT and V6 models simply received body upgrades based on the new Shelby.

A new model of the Mustang with a number of changes to the outer body, increase in internal volume, and three new engine options, namely, a 2.3 litre EcoBoost 310 HP four-cylinder, 3.7 litre 300 HP V6 ans 5.0 litre Coyote 435 HP V8 was introduced in late 2013. 2015 saw the new Mustang earn a five star from the NHTSA, only to be retracted in a few months, following testing of a few later models. Euro NCAP only gave two stars to the 2017 European version of the Mustang, owing to lack of certain safety measures and insufficient air pressure in the airbags. In 2018, the Mustang saw a change in engine models as the 3.7 litre V6 was dropped and the 2.3 litre EcoBoost four-cylinder started serving as the primary power source. The V8 also received an HP increase. 2019 saw many changes being made to the Shelby GT350 in tires, suspension and steering.

The Mustang has become a mammoth brand in the automobile industry and with good reason. Ford continues to add newer models to the already rich Mustang heritage, always keeping enthusiasts on edge for the next Ford beast.