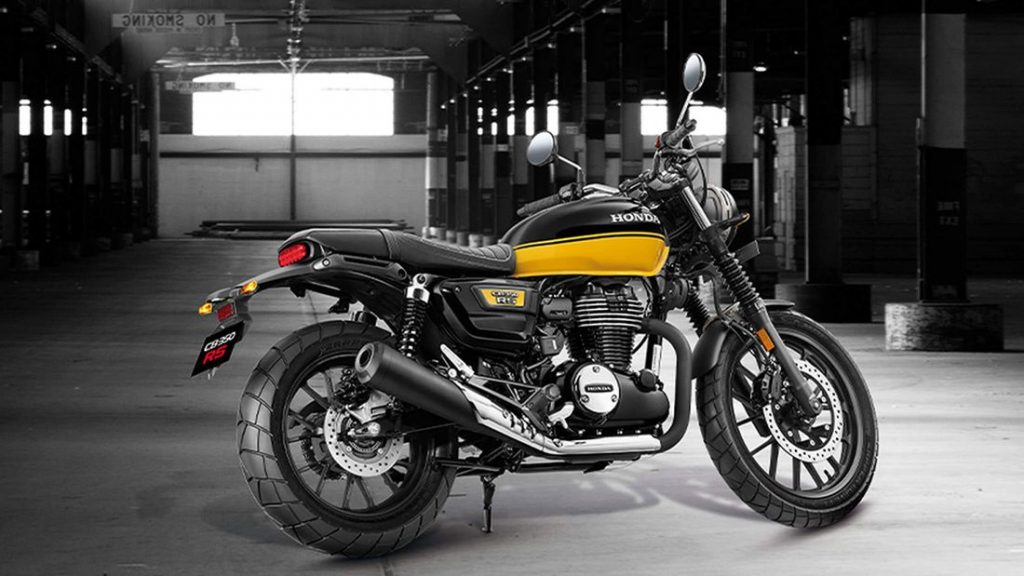 Honda’s long-awaited solution to Royal Enfield is the CB350 H’ness. The Honda CB350 has been pitted against Royal Enfield’s best-seller, the Classic 350, and has left no stone unturned (including the exhaust note) in order to outperform the ageing Classic. In reality, when we compared the H’ness to its class rivals, it came out on top, even beating the Royal Enfield Meteor 350, the winner of the 2021 IMOTY. Honda also introduced the CB350RS, a new version of the CB350 that promises to appeal to those looking for a much sportier take on the traditional body shape of the H’ness.

In the automobile world, the RS moniker normally stands for “Road/Rally/Race Sport,” but Honda is naming it “Road Sailing.” There have already been a lot of jokes about it, so we’ll just ignore it. On the side panels, you’ll see a pure and basic CB350RS sticker, which looks very nice if you’re a fan of Honda’s classic CB models. Even the two limited colour options (for 2021) look like a throwback to the classics, with the yellow pinstripe design visually lengthening the bike.

But that’s the extent of the resemblance to the old country. With its stubby tail and upswept exhaust canister, the Honda CB350RS has a clear resemblance to the new CB1000R (or CB300R). While the H’ness has a leaner stance thanks to the sharp fenders, a rear wheel-hugger with an embedded registration sticker, like the 1000R, would have been a better feature factor than the CB350RS’ floating rear fender. But, in addition to “Road Sailing,” we heard phrases like “off-road” and “scrambler look” repeatedly during the press demonstration of this motorcycle, which is why an engine bash plate is included.

In order to do this, the CB350RS switches to 19F/17R wheel sizes, which are shod with block pattern tyres and have a much taller profile, giving the RS 2mm more ground clearance. These tyres have some drawbacks on tarmac as compared to the H’ness (Honda CB 350), since they squirm at higher lean angles, but their pattern makes them slightly better suited on broken tracks, gravely and rocky paths, should you come across them on your journey. The stopping intervals on our test bike were also marginally longer than on the H’ness. The brakes, like the H’ness, are sharp, necessitating a little more caution when braking on slick ground.

The motorcycle has dual-channel ABS and a switchable traction control feature, though the latter is seldom seen on this 21PS motorcycle. But, as I previously said, safety features are always welcome, and the RS has a slip and assist clutch (similar to the H’ness) that, when paired with traction control, stops the rear wheel from hopping and slipping during rough downshifting.

The frame remains unchanged, and the Honda CB350RS’ suspension configuration isn’t drastically different from the H’ness, resulting in a supple climb. The motorcycle maintains its composure admirably around bends. The RS has 112mm of rearward and 12mm of upward movement in the rider foot pegs compared to the H’ness, while the handlebar is 10mm higher, 41mm farther, and 4mm wider than before. This leads to much more forward-biased seating, which gives you a better sense of control, and the repositioned footpegs don’t scratch as much as the H’ness’ equivalents do while cornering.

On the rider end, Honda has given the RS a wider seat with a ribbed pattern. Long-distance comfort is therefore significantly improved over the H’ness, but I suspect this is due to the changed rider geometry resulting from the repositioned pegs and handlebar, rather than an improvement in the seat style.

The turbine is still unaffected. In particular, the tuning and exhaust note are identical to those found on a regular CB350. The finish is different, with a blacked-out engine and exhaust system to match the motorcycle’s sportier stance. However, due to a 2kg weight reduction on the motorcycle (and a marginally thinner me, relative to when I checked the H’ness in November 2020), there is a small gap in the performance statistics of the RS versus the H’ness.

The engine’s characteristics remain unchanged as well: its cruising sweet spot is between 100-110kmph, it can go past 130kmph with hesitation and clamour, it has tall gearing that necessitates several gear changes when riding at city speeds, and it gets the excellent fuel economy that Honda is known for. The tank’s design and capability remain unchanged, and a 400-kilometer highway range is achievable if you cruise at 80-100 kilometres per hour.

The motor is likely to win you over with its smooth operation and fast rev build-up, and although it isn’t as powerful as the 250cc street nakeds, it feels sufficient for road use. Although the tyres and rear-end construction make the CB350RS look like a scrambler, the engine lacks the low-end grunt and the suspension lacks the travel and softness that you’d imagine for scrambling. However, if you treat the RS like a City Bike, you’ll appreciate its ability to cruise around on tarmac as well as in bad road conditions.

Though the CB350 H’ness took an unusually long time to arrive, Honda is losing little time in expanding the model into more versions that would theoretically enable them capture a bigger slice of the pie. While the Honda CB350RS is just a small step in the right direction, we expect to see more substantial models built on this platform in the future. A higher price tag, despite the absence of Bluetooth compatibility (available on the H’ness) and a USB-C adapter (available as an add-on) in favour of sportier styling elements, can make you feel cheated.  However, as they claim, buying a motorcycle is an emotional choice, and if the CB350RS’ visual zing appeals to you, you won’t go wrong picking it over the H’ness – a motorcycle that has already proven to be superior to its peers in our tests.