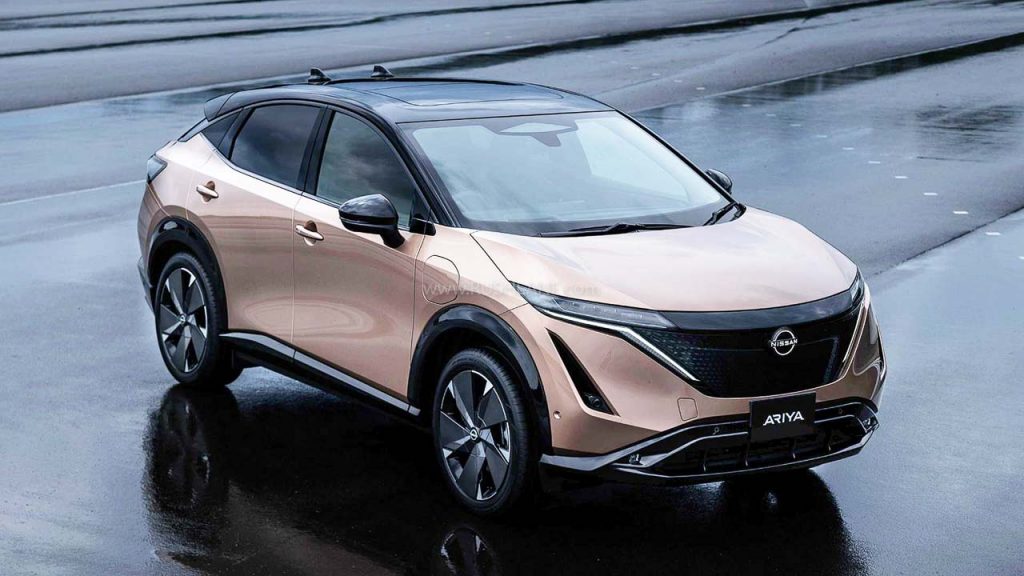 Nissan is one of the first names that comes to mind when we think about electric vehicles. Previously launching the Nissan Leaf Hatchback that made a more-than-considerable roar in the market, they are now back with a brand new mid-size SUV that can go as fast as 300 miles range

The Nissan Ariya SUV is scheduled for sale in Japan in mid-2021, followed by Canada and the USA in the latter half of the year. The new Nissan SUV serves as the ultimate milestone in the four-year plan of the company to achieve profitability, financial stability, and sustainable growth. But keeping the corporate machinate aside, let us get into the specifications.

The Nissan Ariya will be very different from the Leaf Hatchback. It will be available in multiple configurations, including a twin-electric motor set-up and a two-wheel-drive version that enables all-wheel-drive performance. Buyers have the option to choose between two battery sizes of 63 kWh and 87 kWh. Nissan promises that one can achieve a driving range of nearly three hundred miles with the two-wheel-drive version. The company is yet to reveal the charging time for Ariya. The EV charging time could be a potential sticking point for buyers if it takes more than twenty minutes to reach 80% capacity.

Compared to most Japanese automakers’ cars, the Ariya lacks angular, sharp lines. It seems like Nissan has opted for a more family-friendly, and softer appearance. However, despite the tech-forwardness, Ariya also lacks many idiosyncratic flourishes like other Nissan cars such as fake engine noise and the koi fish virtual assistant. Still, being an EV, it has the ultra-thin headlights, brake lights, along with a solid faux grille that can give the buyers a Ford Mustang Mach-E feeling. The Ariya, thankfully, does not come with an overly-futuristic design like most EV cars but its wheels stand out. The available colour choices include copper paint tone, deep blue, candy red, and more.

The Ariya is powered by the ProPilot Assist 2.0, the latest in Nissan’s driver assistance system. The ProPilot offers an active driver-monitoring system that enables hands-free driving even on highways. Apart from that, the ProPilot can also control speed, in-between car distance, and keep the car going in the lane with the least assistance from the driver. It assists the cameras in detecting lane markings at highway speeds. The assistance system also helps the system to look for adaptive cruise control, blind-spot detection, and lane-keep. The car will remain in the same lane until the driver deliberately changes it.

The Nissan Ariya comes with two 12.3-inch horizontal screens in the dashboard. While one screen is located centrally on the dash, and the other is at the back of the steering column. The displays are not floating. Instead, they are oriented with a wave-like shape, offering effortless operation and reach. The HVAC system of the car could be accessed through a set of haptic switches situated at the wooden panelling under the centre screen. The legroom comes with an abundant space that is typical of cars that come without any internal combustion engine. The family vehicle can fit up to five people. The Ariya is also going to be the first model of Nissan that includes over-the-air firmware updates for upgrading the infotainment system of the car. It comes with Android Auto and Apple CarPlay wireless connectivity.

Against the backdrop of coronavirus and the pause in the production of automobiles, automakers around the world are struggling. Luckily, Nissan has a bag full of experience that they can apply to the Ariya, along with a late estimated release date to avoid the immediate problems of the pandemic. The price is set at approximately Rs. 35 Lakhs ($46,000) and above, although no official announcement has been made in India yet. With its normal-but-not-boring design and unique motor configuration to deliver startling performance, Nissan has made good bets for them to achieve the desired success.