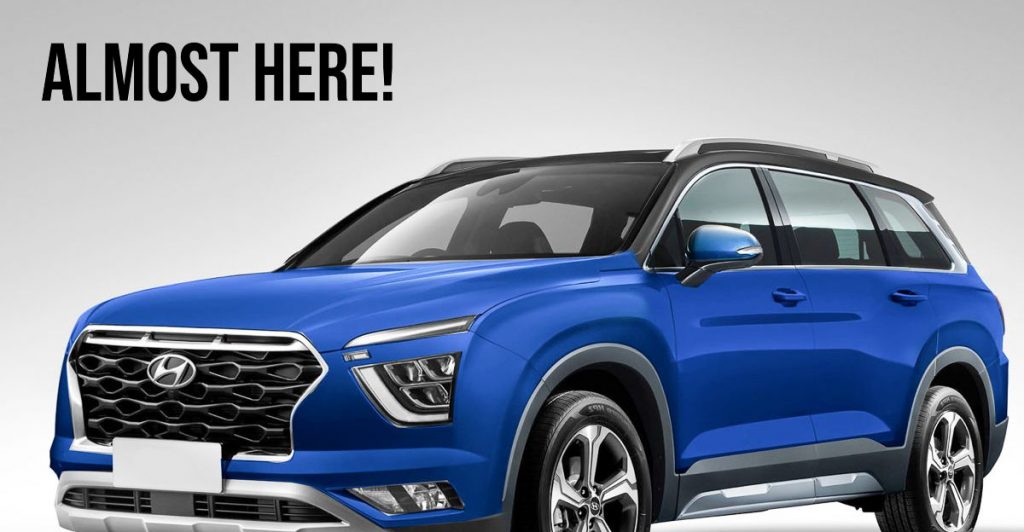 The much-anticipated Hyundai Alcazar 7-seater SUV will make its world debut in India on April 6, 2021. Hyundai also unveiled the first image of the SUV, which shows the side view, cabin, and rear, ahead of the global unveiling. It’s essentially a 7-seater version of Hyundai’s second-generation Creta, which debuted in 2020.

The side profile of the Hyundai Alcazar 7-seater SUV has undergone major changes, as seen in the first sketch shot. In comparison to Creta’s rounded appearance, it appears to be slightly longer and has a flatter profile. The SUV is focused on Hyundai’s Sensuous Sportiness Global Design Identity, which has already been seen on a new generation of Hyundai cars and SUVs.

The Hyundai Alcazar also has a longer rear overhang and a redesigned C-column. The size of the rear door seems to have been expanded for easier ingress and egress. In the 5-seater Creta, the roof style has also been modified, and it is now flatter rather than sloping. The SUV also gets a roof-mounted bumper, ORVMs with incorporated blinkers, diamond-cut alloy wheels with different styles, and different wraparound taillights.

The Creta has a silver bar that extends over the window line and merges into the C-pillar; the Alcazar, on the other side, has blackened pillars with a thinner C-pillar and a glass space between the C- and D-pillar to give the third row inhabitants a more open look. In comparison, the Alacazr’s 5-seater variant has body-colored door handles rather than chromed ones. The back profile has been redesigned as well, and it now has a flatter profile. It receives new taillights, a tailgate, and a bumper.

The new Hyundai Alcazar would have a larger wheelbase and a longer length to fit the third row of seats. According to rumours, the SUV would have a 20mm longer wheelbase and a 30mm longer length. The front fascia would be similar to that of the 5-seater Creta, with the addition of a chrome-studded radiator grille and a subtly tweaked headlamp. Front parking sensors will be added to the SUV, which are not available on the 5-seater. It would almost definitely come with a bigger touchscreen infotainment device (larger than the Creta), auto-dimming IRVMs, 360-degree camera, leather upholstery, and front parking sensors.

The Alcazar will be available with two engine options: a 1.4-liter turbocharged petrol with 6-speed DCT and a 1.5-litre turbodiesel with 6-speed torque converter. A 6-speed manual transmission could be standard. The 1.5L diesel engine produces 113bhp and 250Nm of torque, while the 1.4L petrol engine produces 138bhp and 250Nm. The 1.5L naturally aspirated petrol engine used in the 5-seater model is unlikely to be available.