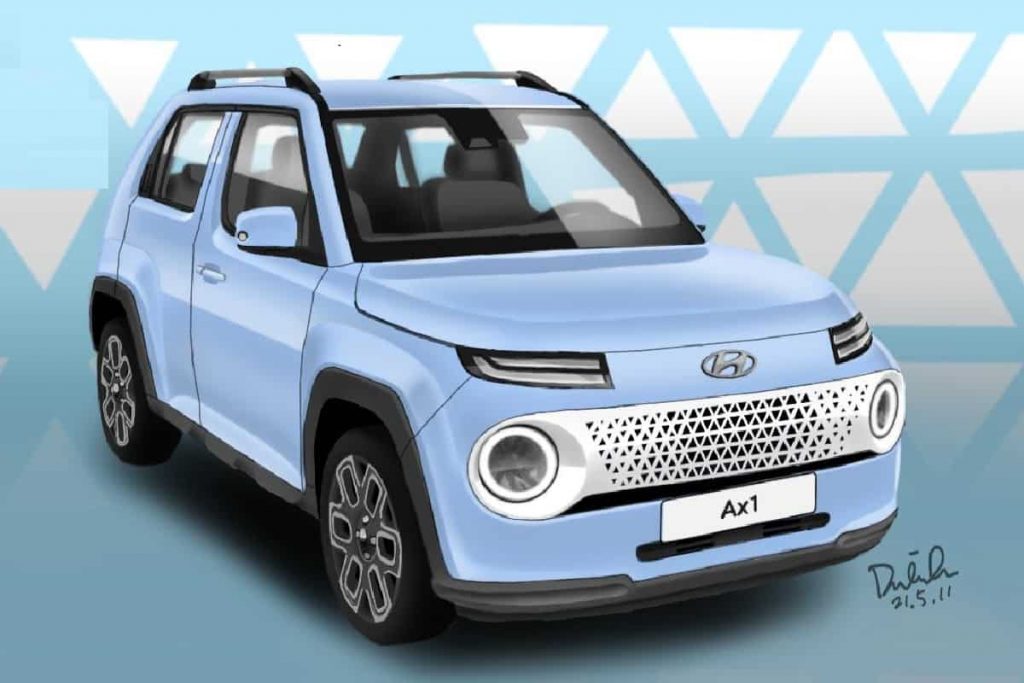 The Hyundai AX1 is the South Korean automaker’s entry into the compact SUV sector (codename). In the following months, its production-ready model will make its global premiere. The manufacturer teased its headlight and taillamp designs earlier this month with a teaser photograph. Now, spy photos of the close-to-production version have surfaced on the internet. Along with the upright and boxy body constructed, the new Hyundai compact SUV will feature the brand’s hallmark SUV design language.

Circular projector headlights with a split arrangement and LED DRLs incorporated into the bottom section of the bumper will decorate the front fascia. The turn indicators will be fashioned as a single round bulb, while the LED taillamps will feature a triangular pattern. The tailgate will have the same strong creases as the Venue.

The characteristic cascading front grille with mesh pattern, a flat bonnet, multi-spoke alloy wheels, significant squared-off wheel arches, black plastic cladding around the body, roof rails, and low overhangs are some of the other notable features. The next Hyundai AX1 will be substantially smaller than the Venue in terms of proportions. The new small SUV’s overall length is expected to be roughly 3.7 metres, while the Venue is 3995mm long. It might be built on the same basis as the Santro and Grand i10 Nios hatchbacks.

The Hyundai AX1 small SUV’s interior has yet to be unveiled. However, features like a touchscreen infotainment system with Apple CarPlay and Android Auto connections, wireless charging, power folding mirrors, keyless enter and go, a rear view camera, and more are expected to be included.

The 1.2L, 4-cylinder naturally aspirated petrol engine seen in the Grand i10 Nios is anticipated to be featured in the forthcoming Hyundai compact SUV. The motor has a max output of 83bhp and a torque of 114Nm. The Santro’s 1.1L 3-cylinder petrol engine might be used in the mini SUV’s lesser trim levels.