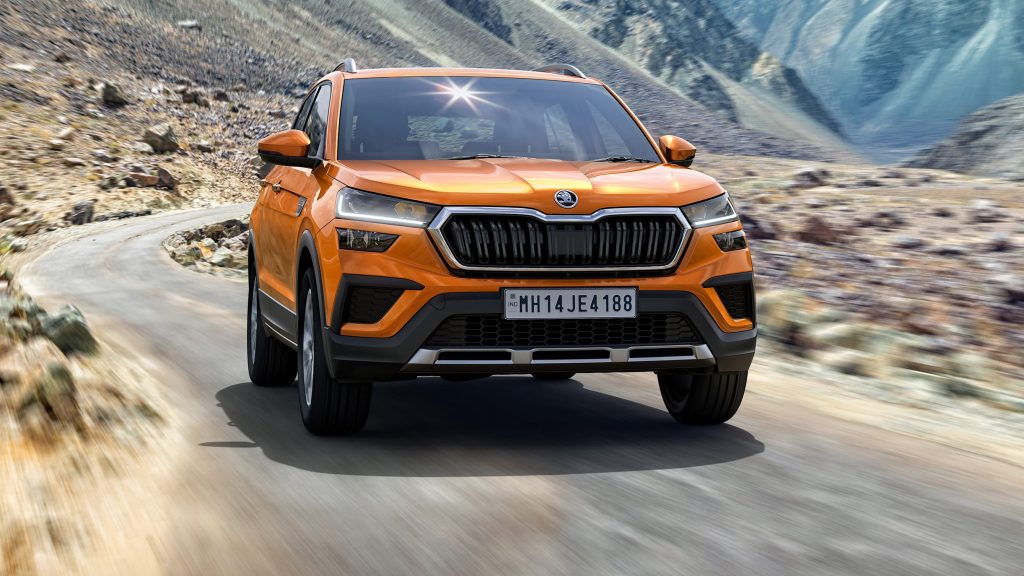 The Skoda Kushaq mid-size SUV’s price will be revealed tomorrow (28th June 2021). The automaker has stated that delivery of the vehicle would begin on July 12th. The SUV will initially be available with a 1.0L turbo petrol engine (115bhp/178Nm) and 6-speed manual or torque convertor automatic transmission. The more powerful 1.5L turbo petrol engine (150bhp/250Nm) will be available in August, with both a 6-speed manual and a 7-speed DSG automatic transmission. The SUV range will be divided into three trim levels: Active, Ambition, and Style.

The Skoda Kushaq mid-size SUV’s pricing will be revealed tomorrow (28th June 2021). Deliveries of the vehicle will begin on July 12th, according to the automaker. The SUV will initially be available with a 1.0L turbo petrol engine (115bhp/178Nm) and a 6-speed manual or torque converter automatic transmission. In August, the 1.5L turbo petrol engine (150bhp/250Nm) with 6-speed manual and 7-speed DSG automatic gearbox will be available. The Active, Ambition, and Style trim levels will be available for the SUV model lineup.

The Skoda Kushaq’s dashboard is layered, with a knurled plastic panel spanning the length of it and a thin chrome strip linking the chrome-lined vents. The SUV is equipped with the brand’s unique two-spoke steering wheel with control buttons located on it. It has VW Group’s innovative “Play” infotainment system, which includes wireless Apple CarPlay and Android Auto compatibility, in-built applications, linked car technologies, a “Valet” mode, in-car Wi-Fi, and more.

Other notable features include USB Type-C connections, six speakers, and a 50-watt subwoofer, an electric sunroof, ambient interior lighting, and a chilled glovebox. The Kushaq will be the first car in its class to come equipped with electronic stability control (ESC). Optional features include hill hold control and a tyre pressure monitoring system. Isofix child seat attachments, a multi-collision braking system, a rear parking camera, and automatic headlights and wipers are all included.

The Skoda Kushaq is based on the India-specific MQB AO IN platform and adheres to the Vision IN philosophy. An aggressive front fascia is created by Skoda’s distinctive front grille with chrome surround, twin headlight arrangement with LED DRLs, bumper with many creases and cuts, a false air intake positioned under the fog lights, and a faux skid plate with three slats at the bottom. Roof rails and 17-inch dual-tone diamond cut alloy wheels are included in the top-end model.

The body cladding around the wheels and on the bottom portions of the door adds to the car’s athletic appearance. Wraparound LED taillamps with a few noticeable crystalline components and a chrome strip running across the tailgate are featured at the back. The Skoda Kushaq is smaller than the Creta and Seltos, measuring 4225mm in length, 1760mm in width, and 1612mm in height. It does, however, have the longest wheelbase in the class at 2651mm. It had an 188mm ground clearance and a boot space of 385 litres. The rear seat may be folded to enhance cargo capacity by up to 1450 litres.

Skoda’s new mid-size SUV will be available in five colours: Carbon Steel, Tornedo Red, Honey Orange, Candy White, and Brilliant Silver. Prices for the Kusaq are expected to start at Rs 10 lakh for the base model and rise to Rs 16 lakh for the top-end model (ex-showroom). It will compete with the Hyundai Creta and Kia Seltos in this price bracket.