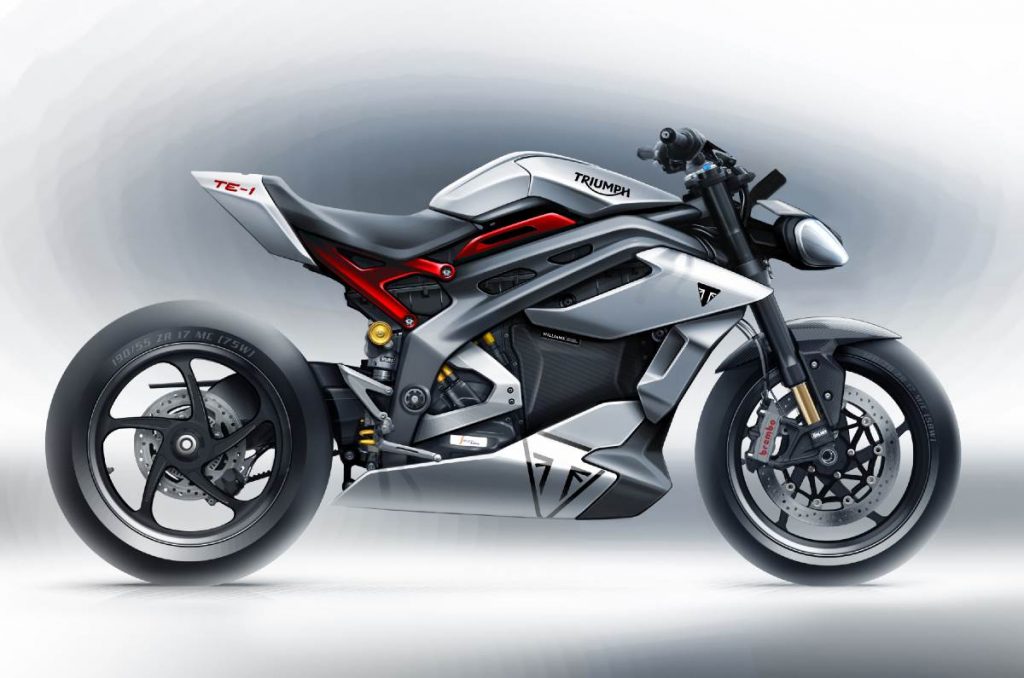 Well, indeed! With the TE-1, Triumph Motorcycles is able to enter the electric vehicle market. Although the electric motorcycle is still a ways off from hitting the market, the manufacturer has revealed a number of specifics about it, including information on the batteries, engine, and frame. In addition, a few styling drawings have been announced. Triumph Motorcycles, Williams Advanced Engineering, Integral Powertrain, and WMG at the University of Warwick collaborated on the initiative, which was financed by the UK Government’s Office For Zero Emission Vehicles. So here’s a brief rundown on the Triumph TE-1 concept electric motorcycle.

Since it’s a ‘naked’ Triumph, the styling is quite similar to the Speed Triple’s, complete with bug-eyed headlights, upside-down forks, mock fuel tank, and high-set tail section. The TE-1’s pose is also very similar to that of the Speed Triple. The TE-1’s frame, on the other hand, is identical to that of the Street Triple. Triumph Motorcycles is currently developing the chassis as well as finalizing production and engineering processes.

Integral Powertrain Limited’s e-Drive division will focus on designing a high-performance electric motor that is power-dense, according to the company. The company is also developing a silicon carbide inverter with the aim of combining the motor and inverter into a single housing, reducing the overall mass and volume of the drivetrain. The electric motor itself is said to weigh just 10 kg and produce a maximum strength of 174 bhp. The business is said to place a heavy emphasis on design for production and assembly in order to provide consumers with cost-effective motor and inverter efficiency.

The Williams Advanced Engineering team will be in charge of developing the battery and the vehicle control unit, while the University of Warwick’s WWG team will conduct tests and simulations to enable Triumph to create software that integrates all of the systems to ensure proper throttle response, regenerative braking, and traction control.

The TE-1 project started in 2019 and has now finished phase II, with phases III and IV yet to be completed. A riding prototype, according to Triumph, may be available by the end of 2021. However, it is unlikely that the motorcycle will be available for sale until 2022 or early 2023. Triumph Motorcycles has not yet announced a release date.